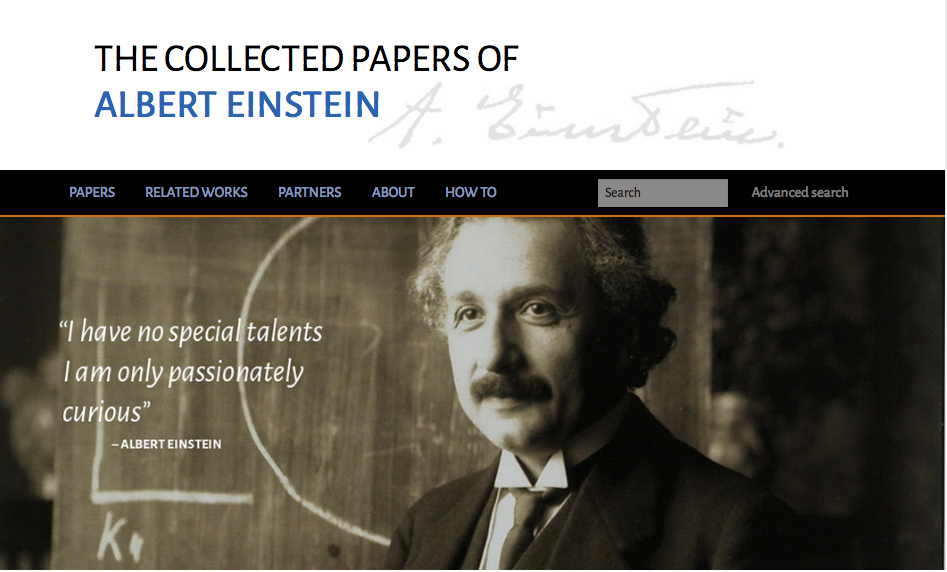 Launching today, THE DIGITAL EINSTEIN PAPERS is a publicly available website of the collected and translated papers of Albert Einstein that allows readers to explore the writings of the world’s most famous scientist as never before.

Princeton, NJ – December 5, 2014 – Princeton University Press, in partnership with Tizra, Hebrew University of Jerusalem, and California Institute of Technology, announces the launch of THE DIGITAL EINSTEIN PAPERS (http://einsteinpapers.press.princeton.edu). This unique, authoritative resource provides full public access to the translated and annotated writings of the most influential scientist of the twentieth century: Albert Einstein.

“Princeton University Press has a long history of publishing books by and about Albert Einstein, including the incredible work found in The Collected Papers of Albert Einstein,” said Peter Dougherty, director of Princeton University Press. “We are delighted to make these texts openly available to a global audience of researchers, scientists, historians, and students keen to learn more about Albert Einstein. This project not only furthers the mission of the press to publish works that contribute to discussions that have the power to change our world, but also illustrates our commitment to pursuing excellence in all forms of publishing—print and digital.”

THE DIGITAL EINSTEIN PAPERS website presents the complete contents of The Collected Papers of Albert Einstein, and, upon its launch, the website—http://einsteinpapers.press.princeton.edu—will contain 5,000 documents covering the first forty-four years of Einstein’s life, up to and including the award of the Nobel Prize in Physics and his long voyage to the Far East. Additional material will be available on the website approximately eighteen months after the print publication of new volumes of The Collected Papers. Eventually, the website will provide access to all of Einstein’s writings and correspondence, accompanied by scholarly annotation and apparatus.

What sorts of gems will users discover in THE DIGITAL EINSTEIN PAPERS? According to Diana L. Kormos-Buchwald, director of the Einstein Papers Project, “This material has been carefully researched and annotated over the last twenty-five years and contains all of Einstein’s scientific and popular writings, drafts, lecture notes, and diaries, and his professional and personal correspondence up to his forty-fourth birthday—so users will discover major scientific articles on the general theory of relativity, gravitation, and quantum theory alongside his love letters to his first wife, correspondence with his children, and his intense exchanges with other notable scientists, philosophers, mathematicians, and political personalities of the early twentieth century.”

Buchwald also noted that THE DIGITAL EINSTEIN PAPERS will introduce current and future generations to important ideas and moments in history, saying, “It is exciting to think that thanks to the careful application of new technology, this work will now reach a much broader audience and stand as the authoritative digital source for Einstein’s written legacy.”

THE DIGITAL EINSTEIN PAPERS enables readers to experience the writings of Albert Einstein in unprecedented ways. Advanced search technology improves discoverability by allowing users to perform keyword searches across volumes of Einstein’s writing and, with a single click, navigate between the original languages in which the texts were written and their English translations. Further exploration is encouraged by extensive explanatory footnotes, introductory essays, and links to the Einstein Archives Online, where there are thousands of high-quality digital images of Einstein’s writings.

The Tizra platform was selected for this project, according to Kenneth Reed, manager of digital production for Princeton University Press, because of its highly flexible, open, and intuitive content delivery approach, and its strong reputation for reliability. Equally important was creating a user-friendly reading experience.

“One of the reasons we chose Tizra is that we wanted to preserve the look and feel of the volumes,” said Reed. “You’ll see the pages as they appear in the print volumes, with added functionality such as linking between the documentary edition and translation, as well as linking to the Einstein Archives Online, and the ability to search across all the volumes in English and German.”

THE DIGITAL EINSTEIN PAPERS is an unprecedented scholarly collaboration that highlights what is possible when technology, important content, and a commitment to global scholarly communication are brought together. We hope you will join us in celebrating this achievement and invite you to explore Einstein’s writings with the links below.

Work on THE DIGITAL EINSTEIN PAPERS was supported by the Harold W. McGraw, Jr. endowment, the California Institute of Technology, the National Science Foundation, the National Endowment for the Humanities, and the Arcadia Fund, U.K.

A Sampling of Documents Found in THE DIGITAL EINSTEIN PAPERS

“My Projects for the Future” — In this high school French essay, a seventeen-year-old Einstein describes his future plans, writing that “young people especially like to contemplate bold projects.”

Letter to Mileva Marić — The first volume of The Collected Papers of Albert Einstein revealed that the young Einstein had fathered an illegitimate daughter. In this letter to his sweetheart and future wife, Einstein, age twenty-two, expresses his happiness at the birth of his daughter Lieserl, and asks about her health and feeding.

Einstein’s first job offer — Einstein graduated from university in 1900, but had great difficulty finding academic employment. He received this notice of his appointment as a technical clerk at the Swiss Patent Office in June 1902 and would later describe his time there as happy and productive.

“On the Electrodynamics of Moving Bodies” — Einstein’s 1905 paper on the special theory of relativity is a landmark in the development of modern physics.

“On a Heuristic Point of View Concerning the Production and Transformation of Light” — Einstein received the Nobel Prize in Physics for this paper on the hypothesis of energy quanta.

The telegram informing that Einstein he has won the Nobel Prize — Einstein was traveling in the Far East when he officially learned via telegram that he had been awarded the prize. However, he had long been expecting the prize, as evidenced by a clause regarding its disposition in a preliminary divorce agreement from Mileva in 1918.

“The Field Equations of Gravitation” — Einstein spent a decade developing the general theory of relativity and published this article in late 1915.

To his mother Pauline Einstein — Einstein writes to his ailing mother to share the happy news that his prediction of gravitational light bending was confirmed by a British eclipse expedition in 1919.

To Heinrich Zangger, on the mercurial nature of fame — Having been propelled to world fame, Einstein writes to his friend about the difficulties of being “worshipped today, scorned or even crucified tomorrow.”

To Max Planck, on receiving credible death threats — Einstein writes that he cannot attend the Scientist’s Convention in Berlin because he is “supposedly among the group of persons being targeted by nationalist assassins.”

About The Collected Papers of Albert Einstein
The Collected Papers of Albert Einstein is one of the most ambitious publishing ventures ever undertaken in the documentation of the history of science. Selected from among more than 40,000 documents contained in Einstein’s personal collection, and 15,000 Einstein and Einstein-related documents discovered by the editors since the beginning of the Einstein Project, The Collected Papers provides the first complete picture of a massive written legacy. When completed, the series will contain more than 14,000 documents as full text and will fill thirty volumes. The volumes are published by Princeton University Press, sponsored by the Hebrew University of Jerusalem, and supported by the California Institute of Technology.
http://www.einstein.caltech.edu/

About Tizra
Tizra’ digital publishing platform makes it easy to distribute and sell ebooks and other digital content directly to readers, with exceptional control over the user experience. Combining intuitive control panels with integrated ecommerce, SEO, mobile, multimedia, and content remixing capabilities, Tizra empowers content owners to respond quickly to market feedback and build audience relationships that will hold up over the long haul. The company is headquartered in Providence, Rhode Island, and funded in part by Rhode Island’s Slater Technology Fund.
http://tizra.com | Twitter: @tizra