By Abe Dane November 07, 2013
For years Tizra has focused on giving publishers the power of custom software, without the expense of building it themselves. We're tremendously proud of how this approach has empowered many small- to medium-sized publishers to take control of their futures and build digital publishing programs in ways that would otherwise have been beyond their reach.

But what about larger organizations who may already have strong development teams in-house, or who have already built or bought their own software? We hear you, too, and have now rolled out a series of APIs that will enable you to take advantage of the power of Tizra in ways that extend, and integrate with, what you already have.

Choosing Open Web Standards
Obviously, we're software developers ourselves, so it was important to us to take with an approach that would not only get the job done, but would make sense and be easy for other developers to work with. We know firsthand the frustration of working with needlessly obscure and proprietary APIs.
With this in mind, we chose some of the most popular and accessible open standards on the web: JSON data formats, used according to fairly strict REST principles.  Our experience through many deployments convinced us that the simplicity of programming and the benefits of inherent browser integration we gained more than made up for the loss of some XML tooling. It doesn't hurt if developers actually like working with our software!
What the APIs are Good For
The new APIs give developers a huge range of options, but they boil down to two basic kinds of tasks: Getting data out of Tizra, and putting data in.
Getting data out
Say you've already got a sophisticated website running on a web content management system like Drupal, or WordPress. You may not want to start over with a new CMS, but you may very well want to take advantage of Tizra's ability to promote, sell and deliver digital publications. The usual way of dealing with this is to use Tizra's web design tools to match the look and feel of your existing site, then knit the sites together with links. This can be very effective, resulting in an online experience that felt to end users like a single, seamlessly integrated website.

With the new APIs, however, there's an additional option: Using queries to pull data out of Tizra so it can be displayed in pages managed on the existing CMS. That means you can manage the interfaces you present to your users entirely in one system, which makes things simpler, and enables you to continue to leverage your existing investment in developers and tools. This is exactly what HighWire Press is doing as it integrates Tizra functionality into its existing platform, which make extensive use of Drupal.
Even for publishers who are building sites entirely on Tizra, the APIs offer advantages in that they allow more control over interactions and allowing for automated page generation. For example, Goodheart-Willcox used them to create its own, customized user registration flow with jQery, as shown below. 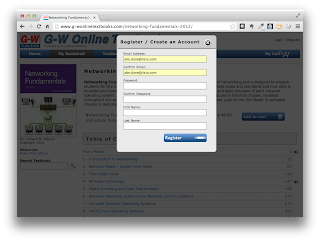 And in another example, LAB-AIDs used them to automate the generation of portals linking to hundreds of individual activity files that would otherwise have required many days of laborious hand coding. 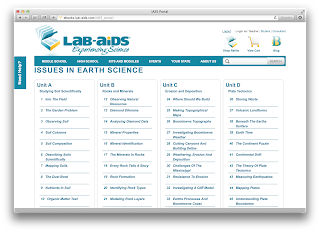 Getting Data In
Of course, the flip side of flexibility in getting data out of Tizra is flexibility in getting data in. If you've already got well established production and publication management workflows, including title management, digital asset management or similar software, you probably will want to automate the loading and updating of content into Tizra's online publishing platform. Our goal with this part of the API was to make it possible to automate ALL of the sophisticated publication management features it's currently possible to perform manually through our Admin control panel, including unbundling of content into chapters or other subsections, pricing, and complex business and access rules.
As a result, it's now possible to automate the digital publication of large catalogs of content. Right now, HighWire Press is doing this with over 1500 ebooks for Duke University Press, and work is under way to publish tens of thousands of ebooks with Project MUSE.
So now, Tizra not only empowers smaller publishers by letting them build sophisticated, direct digital publishing programs just like the big guys, it also gives the big guys the ability to take better advantage of what they already have, and to get to market with new products more efficiently, flexibly and cost effectively.

Drop us a note if you'd like to learn more!