Our Superficial Review of Surface: It Works with Tizra! 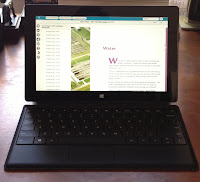 The new Microsoft Surface tablet was on the doorstep at Tizra HQ this morning, and we took a little time to run it through some basic tests.  Overall, our feeling was in line with the reviews: Nice hardware, and potentially attractive for those looking for a more mobile way to use MS Office.  Still a ways to go on software, though.

We tried the Windows RT version of Internet Explorer 10 on a few Tizra sites, and overall they worked as expected, though interactions with the new reading interface we've just developed (more on this soon) were sluggish.  Part of it may be incompatibility with some underlying scripts, which will be tuned as IE 10 becomes more of a factor.  Part of it was probably just our unfamiliarity with new Metro interface.

So for now, our minds are open on Surface as a device, but more importantly, we're thrilled to see another major player striving mightily to develop better ways for users to interact with the great content our customers deliver through Tizra.