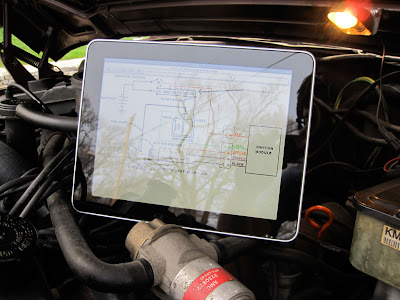 Contrary to our recent post, we do not actually believe Apple intended the iPad as a Tizra viewer. For all the talk of Apps and iBooks, the iPad's real significance is that it does a better job than anything we've yet seen of lowering barriers to using the web.

You don't have to wait for it to boot up, it doesn't need to be recharged all the time, is small enough to keep on you most of the time, but is big enough that you don't have to squint or scroll too much when reading and can fit enough of your fingers on it to type reasonably well. Plus its touchscreen is intuitive enough and response is fast enough that you don't lose your train of thought while getting from one place to another. As Tim Bray says, "speed is a feature."

All these things come together to create something that enables us to work the web—with all its incredible power to inform and facilitate interaction—into more and more of the corners of our lives where it didn't fit before. Those places where there would be that awkward pause in the conversation while you stooped and moused around on your laptop to find that thing you wanted to show someone. Those places where people would say "yeah, but you can't use it while you're…[under the hood of your car, out in the field with a client, lying on a scaffold under the Sistine ceiling, etc.]"

We're still not ready to take it into the bathtub, but this is just the beginning. Apple's done a great job of finally making the idea of a tablet computer real and practical. Others will follow, and who knows how long it'll be before people think WWW stands for Works When Wet?

Anonymous said…
I couldn't agree more. I don't have it yet, waiting for 3g version, but for everything people say it lacks, they miss out on what it can and will accomplish. Apple has always been about pushing the envelope and challenging the status quo of what it should do.

I think as things progress it will be crazy to see how much we will accomplish with this device, now if they could just release the 3g model.

Abe Dane said…
Thanks, eBookNoir! Yeah...we're looking forward to the 3G, too. For us the WiFi is just a preview of the truly mobile device to come.